Your Browser is Outdated!
To experience this and other websites the way they're meant to be experienced, we recommend you update your browser.
Learn More and Update Your Browser
X

In light of the current public health advice and the limited capacity in the Chamber, it will be assumed that Members will take part in hybrid proceedings remotely unless they indicate otherwise. If, after signing up to speak, Members wish to take part in a proceeding from the Chamber, they should email holgovernmentwhips@parliament.uk copying in their own Whips’/Convenor’s office. This must still be in advance of the speakers' list closing for that item of business. If there are more Members wishing to take part physically than there are spaces in the Chamber it will be for each individual party/group to determine which of their Members make the final speakers' list.

The full Procedure Committee Guidance on virtual proceedings can be found here.

The closing times of speakers' lists for differing kinds of business are shown below: 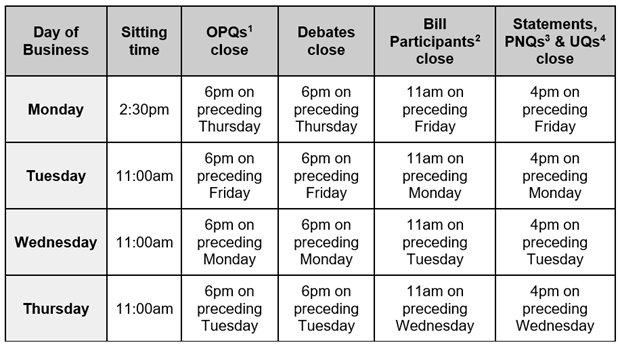 Government Whips in the House of Lords

Lords Whips have the same constitutional position as Departmental Ministers. Their role in the House of Lords is different from that of Whips in the Commons, which is predominantly party management.

A Lords Whip has an active role at the despatch box promoting and defending departmental policy which involves:

If the department concerned does not have a Departmental Minister in the House of Lords, all of that Department’s business will fall to a Whip.

Government Chief Whip and Captain of the Gentlemen at Arms
The Rt Hon. the Lord Ashton of Hyde

The House is adjourned for Whitsun. It will return at 11am on Tuesday 2 June.